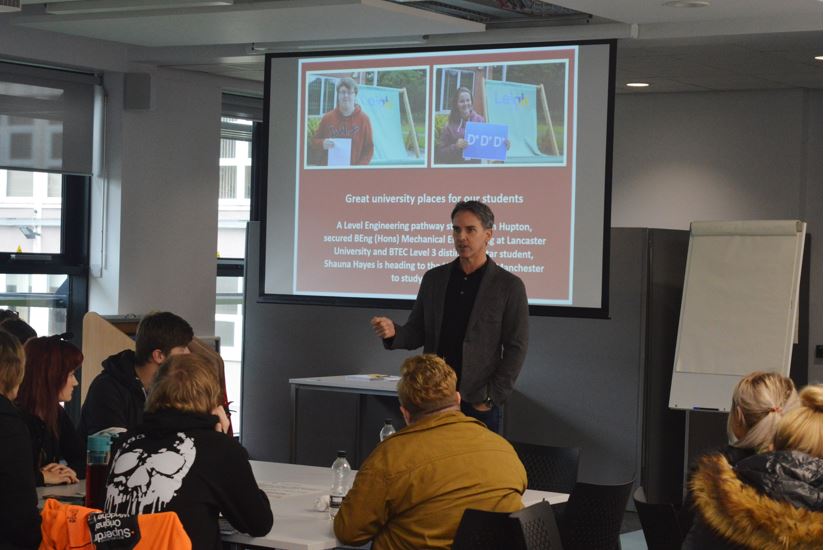 Not only is he Manchester’s first ever night-time economy advisor but he’s also one of the most influential figures in Manchester’s nightlife scene.

Sacha Lord-Marchionne, co-founder of The Warehouse Project and the Parklife Festival, previously had his own club night in the famous Hacienda club and produces many other renowned festivals around the world.

Sacha highlighted the important of night time economy and how Wigan has lots going for it using examples of other Greater Manchester areas that have improved over the years.

It was a perfect opportunity to discuss a range of important issues with such a prominent figure.

Students prepared thought provoking questions on topics including transport links, safety, parking as well as food outlets, entertainment and venues, that would attract more people into the town centres and offer more options for young people; especially in the early evenings.

After an engaging and lively debate in which he also shared stories of his journey to set up The Warehouse Project, Sacha was impressed by the students’ questions.

“It was good to know that these local students are clued up on these key things.”

“The questions were really interesting and the fact that the students were touching on part of my blueprint with factors such as safety and transport was great to see.” he added.

Throughout the session, the Night Time Economy Adviser encouraged students to voice their opinions and work alongside the council on this important issue.

There was also an added incentive for students who followed through with their ideas, with the promise of VIP tickets to next year’s Parklife festival which welcomed much eagerness.