Diners get a flavour of MasterChef finalist’s cooking 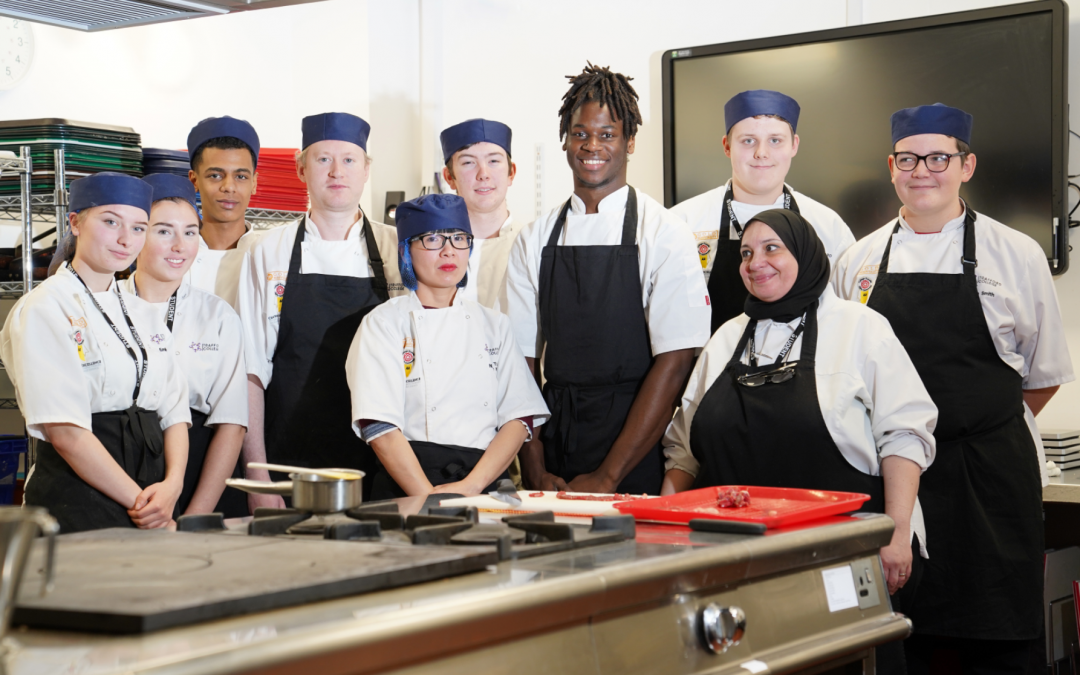 Trafford College’s MasterChef: The Professionals finalist has returned to the training kitchens where it all began to cook a four-course meal for a full house of lucky diners.

Former catering student Exose Grant Lopo-Ndinga appeared on the BBC 2 show last year as one of the youngest chefs in the competition aged just 22 with five years of work experience and an appearance on Bake Off: The Professionals under his belt.

Visitors to the College’s Aspire Restaurant on Thursday 12th March were treated to a mouth-watering menu of Artichoke Velouté, Confit Salmon, Lamb Rump and Chocolate and Orange Mille-Feuille, which included a tongue-in-cheek nod to a dish that almost saw him exit the TV programme in the first round!

Head of Catering Matt Shaw said: “Exose was unlucky in the blind cook off when he was presented with the preparation of artichoke. It’s not such a common dish, and the program-makers knew this when they put chefs up for their first challenges. What I like is that for his guest chef night at our onsite public restaurant, Aspire, Exose has shown the humour and resilience to put it on the menu.”
Exose aced the remaining series of challenges on BBC’s MasterChef, cooking up complexities such as Aquafaba Mayonnaise, Butternut Squash Gnocchi, Cherry Souffle and Cardamom Chocolate Ganache, all of which showcased the butchery and patisserie skills he learned in the College kitchens and James Martin Manchester restaurant.

Exose said: “The highlights I’ve had so far after leaving the show, have been travelling around the UK doing pop-up nights at restaurants with the other MasterChef finalists as well as being back in College where it all started. It’s great to be able to show students what I’ve learned, do a bit of teaching and be able to give something back.”

Catering student Ben Metcalfe, who is in the UK Squad for the 2021 Shanghai WorldSkills contests, said: “It’s great to be able to learn from such an amazing chef who is here to teach us some tricks of the trade and show us what could be possible following our training.”