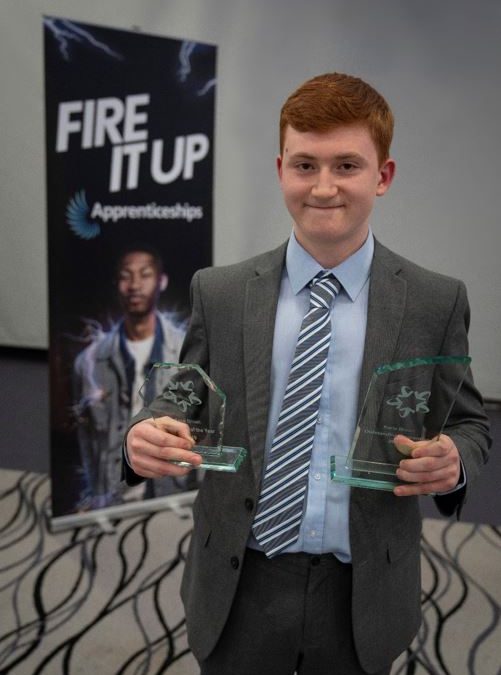 This article is being published by GMLPN as The Trafford College Group are members.

Three Trafford College Group apprentices have added to their silverware with trophies from Altrincham and Sale Chamber of Commerce Business Awards.

Trafford College Group Assessor Emma Nixon said: “Kane is a true success story. This young apprentice has developed beyond all expectation. I’ve seen him develop from a shy school leaver into a skilled professional. It goes without saying that his colleagues also think he is just a true star.”

Meanwhile, Nadeem also had to make a room in his trophy cabinet for the Chamber award, after clinching NHS Outstanding Contribution to Pharmacy Services in the Workplace last month.

Apprentice business development manager Michelle Whitehead said: “Nadeem was appointed a new line manager for the remaining journey of his apprenticeship. Again Nadeem took to this situation well and continued to strive!”

Aimee Southgate was also highly commended at Stockport Business Awards the same night as the Chamber Awards, having made the shortlist as a hot tip as only of the area’s future leaders in the ‘Rising Star’ category.

Apprentice business development manager Lola Docherty said: “Aimee shows exceptional promise working in a very progressive salon. For her dedication and hard work she put in during her apprenticeship, she deserves all the success.”

For more information about apprentices, visit https://trafford.ac.uk/apprenticeships or call 0161 886 7461